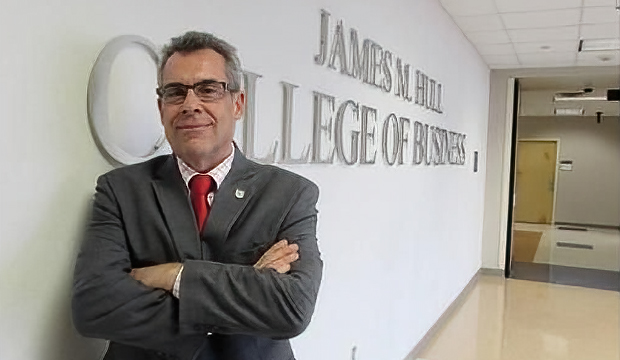 Dean Richard Franza’s column appeared in the Sunday, June 20 edition of the Augusta Chronicle. The post can be viewed here.

During most of my childhood, my father was a high school math teacher. While he typically worked most summers as an engineer/draftsman (including stints at Grumman Aerospace in Bethpage, N.Y., working peripherally on the Apollo Lunar Module), he always put aside the last two weeks of August for a family vacation. For those two weeks, my parents, my sister and I traveled to various parts of the United States in our 1963 Ford Country Squire station wagon (with the requisite faux wood panel sides!).

My parents would typically identify a part of the country (e.g., New England, Southeast, Midwest) for a particular summer sojourn, and each of the four of us could pick out at least one city or attraction to visit during that trip. We often stayed in local motels (usually with a pool!) because back then, even Holiday Inn was above the budget of a high school teacher.

We always had great fun, and I always learned a lot on those trips. My father was a history buff, so these trips often had stops at key locations of the Revolutionary War and Civil War, and places such as the first Ford plant when we visited Michigan.

These trips were extremely useful to me when I returned to school in September. Invariably, the good sisters at St. William the Abbot School had us write an essay on “What I learned on my summer vacation” at the start of each school year. Since I had just returned from one of our end-of-summer family adventures, it was always an easy assignment for me.

Well, as a tribute to those days of yore, I am going to commemorate my recent summer vacation with my wife to Marco Island, Fla., by letting you know what I learned on my trip.

The first thing I learned on my vacation is to share with all workers, but in particular with business leaders and business owners, is that there are many personal benefits to taking a vacation.

While I have taken a couple of long weekends in recent months that were helpful to my physical and mental well-being, taking a full week was much more beneficial. According to a study published in the Journal of Happiness Studies in 2015, health and well-being rapidly increase early in a vacation (as early as just two days in), but they peak on the eighth day of vacation. When I returned to the office this past Monday after a nine-day (two weekends and a full workweek) respite, I felt mentally and physically rested and recharged, returning to my work more focused and energized.

Also, being mostly detached from email and other electronic media was a significant stress reducer. Don’t put off your vacation too long, as there is no “perfect time” for it. The benefits strongly outweigh any potential perceived downsides of time away from the office that often deters some from taking vacations.

Beyond what I learned about the personal benefits of a vacation, I also learned about how our country is evolving post-pandemic, particularly in the areas of Georgia and Florida that I visited.

First of all, it seems like most people have gotten past COVID concerns. They are either vaccinated, already had COVID or just feel like they cannot get it. In the places we traveled, it seemed like things have mostly returned to pre-pandemic normalcy. Everywhere we went was crowded: airplanes, hotels, restaurants, beaches and stores.

When my wife and I originally purchased our flights from Atlanta to Fort Myers, Fla., Delta was not selling middle seats, so given that the airplane we flew on was configured with three seats on each side of the aisle, we purchased an aisle seat and a window seat with an open seat in between. Delta then began selling middle seats, including on our flight, so though we were lucky on our flight down to Florida to have one of the few empty seats on the plane between us, we had no such luck on the flight back, which was completely full. But the person in the middle seat gladly took my aisle seat so that my wife and I could sit together.

Such crowds everywhere did not lend itself to social distancing, which was not so disconcerting to us since my wife and I have both been vaccinated since early April. However, the use of face coverings was inconsistent in most places with the exceptions of airports and airplanes.

Face coverings were expected/required on all of our flights and throughout both airports except when eating and/or drinking. Contrary to many media reports, we saw no incidents in our air travel of passengers resisting such requirements, either on the plane or in the airport.

I think such rules will be in place for the long term, particularly in closed-in places with recirculated air such as airplanes. Face coverings in other places on our trip were clearly optional, but people seemed to respect one another’s decision to wear a face covering or not.

Another thing I learned on vacation is that everything is more expensive than it was both during and even before the pandemic. This includes airfares, rental cars, gasoline and meals at restaurants.

There are a number of reasons for this, including increased demand that was pent-up during the pandemic, higher wages to address labor shortages and supply chain lags that are causing shortages of certain items. So be prepared to spend more this summer and hope that such inflations and their causes are transitory and not longer term.

A final thing I have learned during my vacation was to treat those in service industries with the utmost respect, courtesy and friendliness. While their jobs are always difficult, they are more so now, as crowds swell and their places of business are understaffed. While a good tip is always nice, a friendly word, smile and expression of gratitude is even better.

I hope I provided you enough good lessons from my summer vacation that you enjoyed this column as much as Sister Anthony liked my essay at the start of the fourth grade!