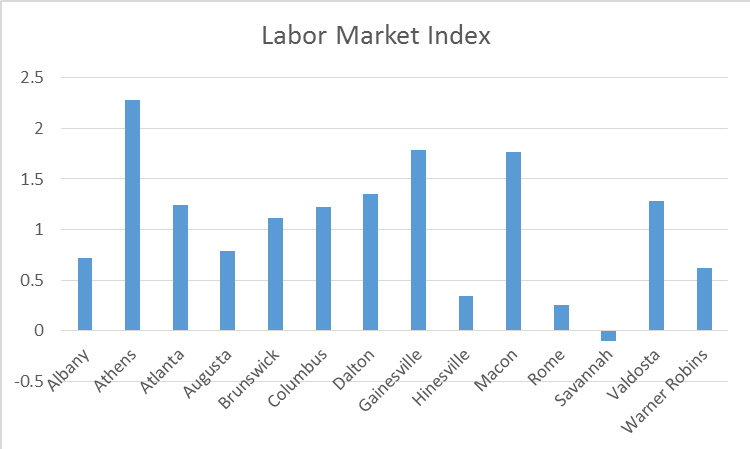 Most of the economic data for 2018 has been released by various government agencies (some is delayed due to the government shutdown) and it shows that the Augusta economy grew at a rate of 0.8% last year as measured by the Labor Market Index (LMI). Since December 2017 the Augusta Metropolitan Statistical Area (MSA) has seen 3,000 more jobs and the unemployment rate fall from 4.7% to 4%. The size of the labor force and average weekly earnings are the same in December 2018 as they were in 2017. Average weekly hours worked fell from 35.3 to 34.8 over the last 12 months. The probability that the Augusta economy is in a recession right now is still very low at 1.6%.

Looking more closely at employment over the last 12 months identifies some interesting patterns. During the first six months of the year, employment grew at an average rate of 3.2 percent compared to the same month in 2017. The last six months averaged just 2.0 percent. The sectors that saw the largest growth over the year were transportation and utilities (3.9%), retail (2.9%), manufacturing (2.3%) and education and health services (1.8%). Education and health services followed a similar path to overall employment with strong growth in the first six months tapering off in the second half of the year. From March, the retail sector was at least 3 percent larger in each month than the same month in 2017. In November a record 28,700 people were employed in the retail sector. Manufacturing continues to grow strongly with nine months recording year on year growth of at least 3 percent.  The growth in transportation and utilities was largely confined to the last three months of 2018. The growth in retail employment reflects national trends that report continued strong growth in consumer spending. Manufacturing remains strong despite higher tariffs on steel and more general worries about trade wars.

Looking at the LMI for other cities in Georgia we find eight MSAs grew faster than Augusta in 2018 while 5 fared worse (see chart). The fastest growing MSA was Athens while Savannah actually witnessed negative growth due to a declining labor force and average weekly wages decreasing. Athens saw strong employment growth in the second half of the year while Savannah reflected Augusta’s trends of faster growth early in the year.  Even so, Savannah’s economy is not in recession with level employment and the unemployment rate 0.6 percentage points lower than December 2017.